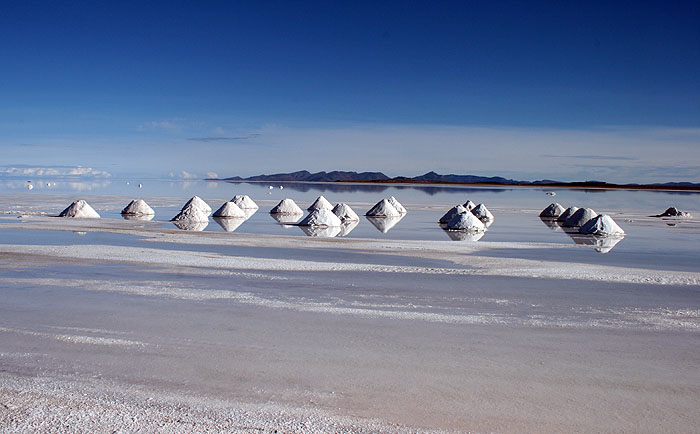 This 12 day itinerary is an in-depth journey through the Andes and lush valleys of Bolivia visiting vibrant colonial cities, silver mines, and vineyards. Visit impressive canyons with colourful rock formations and dinosaur footprints and finish in Uyuni with the option to explore the salt flats.

Days 1-2: La Paz is the world's highest capital. Built 3,600m above sea-level and nestled high in the Andes, it is famous for the Mercado de Hechecería (witches' market) and also has several fine museums documenting the country's colonial past. Spend two nights here taking time to acclimatise and visit the nearby Valley of the Moon.

Days 3-4: Take a short flight to Cochabamba and driven (130km, about 3.5 hours) to the fascinating Torotoro National Park for a two night stay. Visit the turtle grave, the impressive Torotoro canyon, spot dinosaur footprints, and admire sculpted rocks and the Vergel garden with its beautiful river and waterfall. A full day will be spent visiting the Stone city of Itas (about a 1.5 hour journey from Torotoro village), with its panoramic views of the region and interesting walking trails, and the giant Umajalante cave where a 2 hour hike leads one to an area of towering stalagmites and stalactites with an interior lake.

Days 5-6: Return to Cochabamba, with a stop at the village of Tarata, for the short flight to the colonial city of Sucre. A two night stay allows time to explore this flamboyant city, declared a World Heritage site by UNESCO, with its many beautiful buildings, and visit the nearby village of Tarabuco where a lively Sunday market is held.

Days 7-8: At just over 4,000m Potosí is a two hour drive south-west of Sucre. Stay two nights in a beautifully resorted 16th century hacienda outside of the city. Visit the Cerro Rico silver mine, once the jewel of the Spanish conquest, the country's first mint (the Casa de Moneda), wander the narrow streets, admire colonial architecture and visit museums.

Days 9-10: On a full day journey to Tarija (380km from Potosí) travel through the beautiful Cinti Valley (2,400m) with vineyards situated along the river and colourful mountains. The Spanish conquerors first introduced the growing of grapes in this region to produce a local brandy called Singani, which was warming during winter on cold nights in the highlands and enjoyed by those that worked in the silver mines. After a night in Tarija follow the wine route south to Tupiza where grape plantations and wineries produce excellent wines including Cabernet, Syrah, Malbec, Riesling and others at an altitude of 1,840m. A wine and cheese tasting is included on both days and before arrival to Tupiza visit the Tajzara lagoon, with its sandy hills and flamingos.

Days 11-12: Driven along the paved road (200km) to the small town of Uyuni and stay overnight before flying to La Paz for onward connections.

Depart Uyuni on a guided 4x4 overland adventure through the Salar de Uyuni and Andean plateau. Highlights will include Isla Pescado, the Chiguana desert, pink flamingos at Laguna Hediona, the coloured rock formations of the 'Salvador Dali' desert, Isla Incahuasi and Laguna Verde. The hotels are all built in keeping with the region using local materials and the first night is spent at a salt hotel on the edge of the salt flats.

The estimated flight cost included in this itinerary (assuming international flights from the UK plus any internal flights that are necessary) is £1,165 per person.

As a fully bonded and very experienced Tour Operator, we can help you plan and book your perfect trip to Bolivia.