skip to main content
You are here: Home » Articles » A Brief History of Easter Island 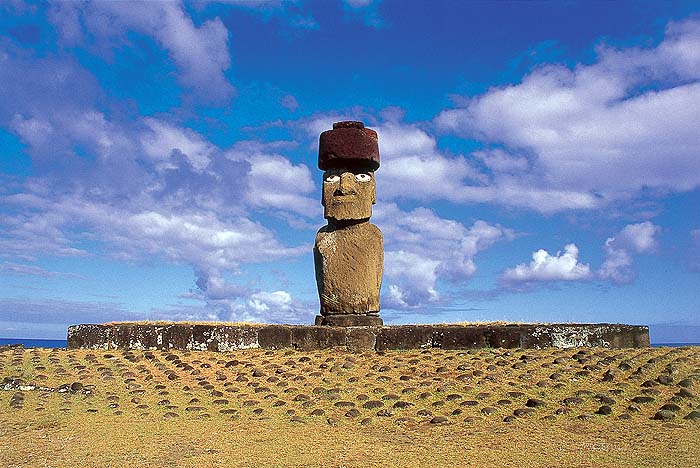 A Brief History of Easter Island

I was fascinated by the history of Easter Island (or Rapa Nui) on my recent visit and thought it might be useful to compile a few facts. The island is so very different to mainland Chile, with a distinctly Polynesian culture that developed in virtual isolation over many centuries.

The remote island is just 14 miles long and 7 miles wide and is around 2,300 miles west of Chile and 2,500 miles east of Tahiti. Geologically it is the amalgamation of three volcanoes which erupted between 780,000 and 110,000 years ago and it lies near the chain of underwater volcanoes called the Easter Seamount Chain. The island is dotted with little conical shaped volcanoes and craters so its volcanic heritage remains clear for all to see.

Sunset over the Pacific

There is some debate as to when the island was first inhabited, but it is generally thought to have been around 2,000 years ago (though my guide said there is evidence of inhabitants 2,000 years prior to that). The colonisation of the island was by the Polynesians, most probably from the Marquesas Islands. There was some debate as to whether there were also settlers from South America, but this has now been dismissed. The first moai (stone statues) were created following the migration 2,000 years ago. Later, the inhabitants purposefully toppled and replaced the early moai with bigger, better ones; often together with burial chambers.

Orongo, site of the Birdman cult

Civil wars began and many statues were toppled by warring tribes. The construction of the moai ended as natural resources became limited and the tribe responsible for creating them realised they needed to stop in order to preserve what few resources remained. By the late 17th/early 18th century, the worship of the Moai ended and there was the rise of the Birdman cult, thought to have come about to bring more harmony to the island. At the centre of the Birdman cult was the annual competition which involved competitors braving sheer cliffs and shark infested waters to retrieve that season's first sooty tern egg from one of the islets near the site of Orongo.

By the start of the 18th century the deforestation of the island was complete. On 5 April 1722 (Easter Sunday), the Dutch captain Jakob Roggeveen landed on the island and named it Easter Island. At this time the population was around 4,000. In 1770 two Spanish ships arrived (claiming the island for Spain and renaming it San Carlos) and the captain later reported the island being lined with massive stone statues. By the time British explorer James Cook visited in 1774, he recorded that many statues were toppled.

In the 1860's the Peruvian slave trade captured over 1,500 men and women (around half the population, numbers having already been massively reduced by those illnesses brought by visiting ships) and took them to work in the Peruvian guano trade. In 1868 the HMS Topaze removed a Moai and presented it to Queen Victoria, who then gifted it to the British Museum (where it still stands today). Christian missionaries put an end to the Birdman cult by the 1860's. By the late 1870's the population was reduced to just over 100 people, decimated by the slave trade and the illnesses those 15 slaves who did return, brought back with them.

The dock in Hanga Roa

In 1888 the island was annexed by Chile and the islanders confined to the settlement of Hanga Roa (still the only town on the island), with the rest of the island rented to the Williamson-Balfour Company as a sheep farm (until 1953).

In 1966 Chile declared Easter Island a province and the islanders were given Chilean citizenship. The following year the airport opened, signalling the start of the island's integration into modern society.

Today of course the main attraction for visitors to the island are the Moai - there are over 800 of them dotted around the island - some toppled and some standing, and another 200 or so still at the quarry of Ranu Raraku. Very few of them have their coral eyes or red stone top-knots, yet they remain an impressive (and unique) sight to behold. For those visitors wanting to be more active then mountain biking, riding and snorkelling are also possible.

Though the native trees no longer exist (there were once over 40 species and palm trees would have once covered the island), it is not the barren windswept land one might expect; there is grassland, vegetation (mostly shrubs but some trees too) and to me the scenery echoes parts of England's southern coastline. The crater at Rano Kau has its own microclimate and ecosystem and thus preserves some endemic species. In terms of culture it is so different to mainland Chile, with the native inhabitants having very distinct Polynesian features and their own Rapa Nui language.

The island has a subtropical climate with an annual average temperature of 20.5°C (though the wind can make it feel cooler). The wettest months are March to June and the driest August to December.

The annual Tapati festival, celebrated the first two weeks of February, is a wonderful opportunity to witness the culture of the island first-hand. Though my visit sadly did not coincide with this, my guide recommended a visit during this period (though visitors must book well in advance as it is the most popular time to visit). The festival began in the 1970's as a way of maintaining and promoting the Rapa Nui culture amongst the islanders and to generate a sense of identity, particularly amongst the younger generation. The festival comprises various dancing and singing competitions and also traditional sporting events. A particular highlight (so I am told) is the Haka Pei, a sort of luge which involves competitors sliding down a steep slope on banana trunks!

Most visitors spend 3 nights on the island, which is generally enough time to see the main places of interest (and justifies the 5 hour flight from Santiago). My highlights were the Moai quarry of Rano Raraku, with some Moai still only partly carved into the rock; Ahu Tongariki, the largest ahu (platform) on the island with 15 large Moai; Ahu Akivi, the only Moai facing out to sea (supposedly to where they came from) and known as 'The Explorers'; and finally the lava tunnels at Ana Te Pahu.

Hangaroa (where I stayed) and Explora hotels both offer fully inclusive stays which include a wide variety of shared excursions. Other hotels can be booked in conjunction with half day and full day shared or private tours.

A visit to Easter Island is best combined with mainland Chile and flights are cheaper when purchased with other Latam flights on an airpass. You will find some itinerary suggestions on our Chile country page, or call us to design your own.