You are here: Home » Argentina » Sample itineraries » Fishing in Argentina 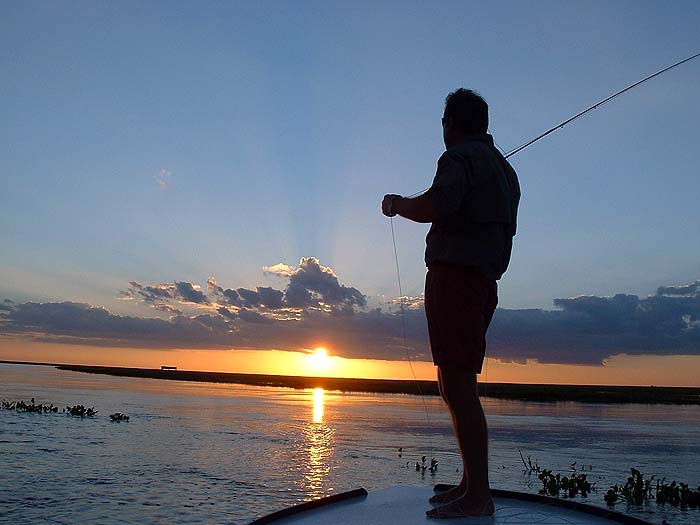 Argentina was the original Latin America fly-fishing destination, after trout and salmon introduced by the first European settlers thrived in Patagonian rivers.

All rivers in Argentina are public, provided access can be gained, so the key to good management and protection is ownership of the surrounding land. The Rio Grande rises in the Chilean Andes (which run from west to east in Tierra del Fuego), and the estancias through which it flows are owned almost entirely by one family. They run, very efficiently, a series of lodges with comfortable accommodation and top guides. Access is from Ushuaia or the town of Rio Grande, depending on flight schedules, and most operate a 7 night programme.

When to go
The climate on these open steppes is very changeable, with strong wind a regular feature, so it is essential to be well-prepared. You will need to bring a windproof, layers, and thermals! We provide kit lists before departure.

The season runs from mid November to the beginning of April, and most lodges open in mid December. The highest prices are from January to March, mainly because of increased demand rather than any reflection on the quality of the fishing. Due to the justified popularity and reputation particularly of the Rio Grande it is very important to book well ahead.

Brown and rainbow trout in the Lake District

The best trout and salmon fishing in Argentina is based around the Lake District, from San Martín and Junín de los Andes in the north, through Bariloche and down to Esquel and the Rio Pico in the south. Brown, rainbow, brook and lake trout abound, as does the Pacific salmon in those rivers that flow eventually out through Chile to the Pacific. There are also land-locked salmon in some lakes. All were introduced around the turn of the century, and have thrived.

When to go
The climate, at least between January and March, is usually warm or even hot. However, the wind can sweep down from the Andes with quite a chill in it, and the closer you get to the Andes the more it rains, so a good wind and waterproof is essential.

The season runs from mid-November to mid-April on most rivers and lakes, almost all catch-and-release. Waders (preferably chest-high, boots with felt soles) are essential.

The enormous marshlands of the Iberá are characterised by lagoons and rivers linked by clear water creeks, and abundant birdlife, and are popular with anglers who come from all over the world to experience the explosive power and aggression of the fresh water dorado. They have an incredible turn of speed, and the glint of their golden bodies as they constantly leap will be a memory to treasure for years to come.

When to go
Possible all year, with the best time from September to the end of April. 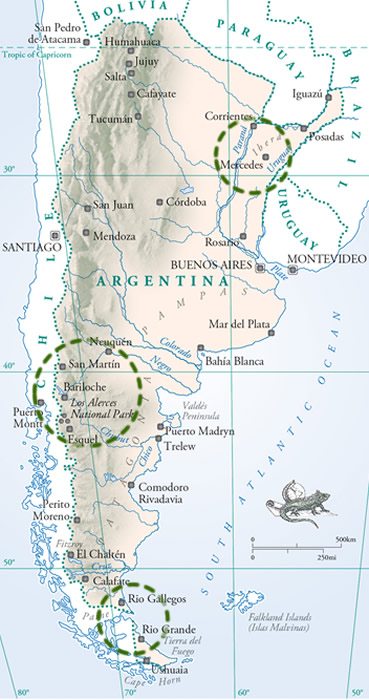 A typical day: Depart for the river at about 9am, after breakfast. Fish through, with a short coffee or mate break until about 2pm. Lunch will either be a picnic prepared at the river or you will return to the lodge if your beat is close (you would normally fish a different beat each day). After a rest return to the river for as long as your arms will permit! You will usually get back to the lodge at about 9.30pm, when, after a shower, drinks and supper will be served (guides eat separately). Depending on the day’s stories you will probably get to bed after midnight.

A typical day: After a hearty breakfast at around 8am depart for the chosen river or lake, rarely more than a 45 minute drive away. 2 fishermen per vehicle with their equipment (normally 2 rods rigged, one with floating and one with a sinking line). Float or wade until around 2.30pm, when lunch will be prepared, accompanied by typical Argentine wines. After a short siesta fishing normally continues until about 8pm. Return for dinner and chat at the lodge (accompanied by your guide). Guide prices include all meals, based on one guide per two fishermen.

A typical day: Depart after breakfast, at around 8am, for a morning of fishing. Return to the lodge at around 12.30pm for a swim, lunch and siesta in the heat of the day. The boats depart again at around 4.30pm, and fishing continues until sunset, when anglers return to the lodge in time for dinner. All meals are prepared with fresh, local produce, and are paired with some of Argentina's finest wines. Bird watching and riding are also available, allowing you to fully enjoy the abundant bird and wildlife this area has to offer.