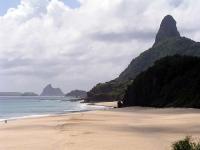 350km off the Atlantic coast, Fernando de Noronha is an archipelago of 21 islands, formed by volcanic activity about 12 million years ago. 70% of the archipelago is a national marine park, generally accepted as one of the most untouched and unique marine systems in the world.

The main island is ringed by a variety of lovely and deserted beaches, the calmest of which are on the leeward side. A unique feature of the island is the presence of spinner dolphins (stenella longinostris), around 1,200 of which congregate nearly every morning in Golfinho Bay and whose aerial displays are a delight to watch. Noronha is a paradise for divers of all standards - turtles, dolphins and even the occasional shark can be seen in addition to a wonderful display of tropical fish.

All hotels in Fernando de Noronha →