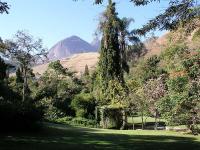 Petrópolis, in the hills above Rio, is an imperial city made famous by Emperor Dom Pedro II. Although close enough for a day trip from Rio, its simple charm makes it perfect to spend a few nights away from the hustle and bustle of the city.

The city was the Emperor's summer retreat in the 19th centuary and his modest palace is now an interesting museum. There are delightful rose-colored houses, many overgrown private gardens and public parks and pretty streets.